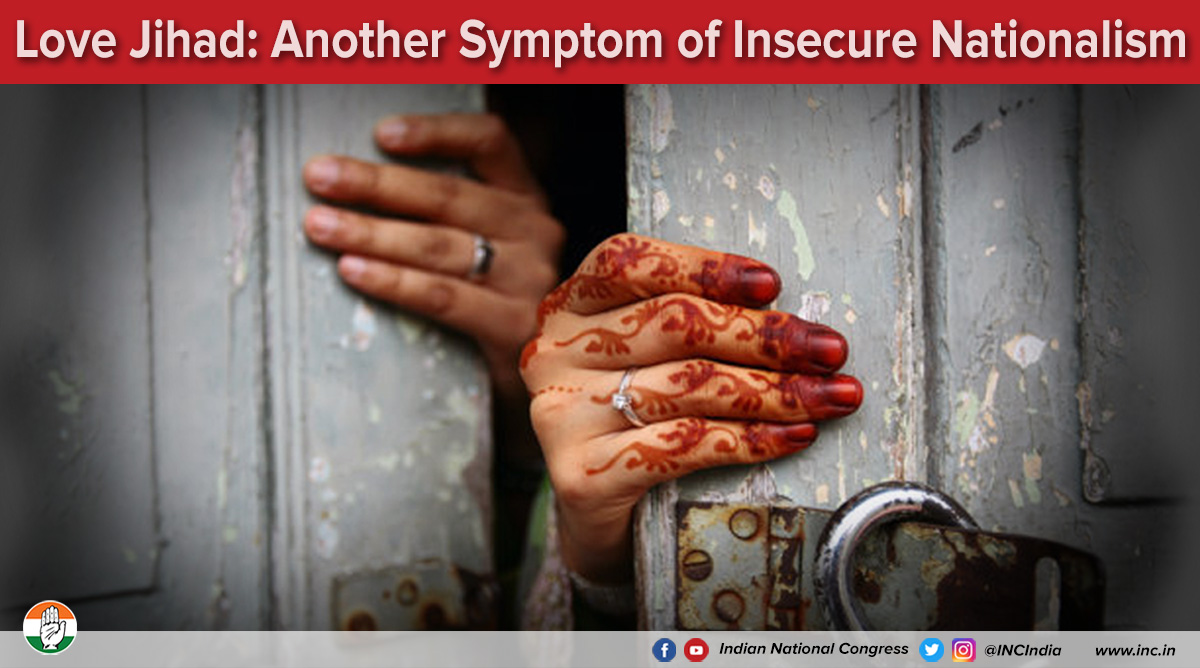 India’s Hindu nationalist Modi government’s recent campaigns of anti-Muslims prejudices aim to completely marginalize the minority community in the public space. With its recent rake-up of the “Love Jihad” issue, the Hindu nationalist government is playing a dangerous game of painting minorities in a negative light to consolidate its vote bank. “Love Jihad”, a term, which Rajnath Singh denied having any knowledge of last September when he said “Love jihad? What’s that” as a response to a question about the bogey local Sangh Parivar leaders fight against an outlandish conspiracy by Muslims to seduce and elope Hindu girls into conversion and turn India into an Islamic state. This clever denial by the Union Home Minister was a crafty ploy to distance himself from the BJP current political campaign that borders on criminal.

From the Babri Masjid to beef ban to love jihad, BJP’s game of communal polarization is becoming increasingly dangerous, but at the same time, it remains politically profitable. The BJP and Hindutva’s exploitation of this communal fear for political gain, especially amidst a rape crisis in India, is particularly troubling, if not sinful. Sexual violence is a terrible reality of the modern subcontinent, which the BJP has a crucial responsibility towards, however, instead of ameliorating it, the BJP continues to exploit it.

With, the brewing hysteria in Uttar Pradesh, party leaders had a wide-open opportunity to denounce it, instead, Yogi Adityanath seems to be adding fuel to the fire with his policies and statements. Congress Party leaders have come out openly condemning the issue, accusing the BJP of spreading communal poison.

In an interview to the Hindu, Saanya, a young woman from Rae Bareli who married a Muslim seven years ago, says she finds the “Love Jihad” accusation disturbing. Furthermore, the resident of Indira Nagar here said that she coaxed her husband, Ali Hasan, to vote for the BJP in this Lok Sabha polls and now feels let down.

The leading figures of our freedom movement were, no doubt, wary of the chauvinism of European nationalism, which, in its worst forms, led to wars, ethnic cleansing and genocide. As things stand, the current state of BJP nationalist ideology would bring nothing but shame to our founding leaders. Far from the ideals of our constitution and Gandhiji’s vision, BJP’s current idea of nationalism is petty, paranoid and insecure.

With rampant poverty and illiteracy, social indicators in a dire state, rampant casteism pervading all spheres of social life, endemic gender discrimination and sexual violence still widely prevalent; BJP’s dogged efforts on religious polarization of Muslim minorities and national chauvinism is eroding our individual and collective rights. The so-called ‘Muslim Problem’ is reflective of nothing but BJP’s insecure nationalist ideology, with ‘Love Jihad’ the newest tool of its naked bigotry to distract from failing basic governance parameters under Mr. Modi