Not just Modi vs RBI, Its Modi vs India 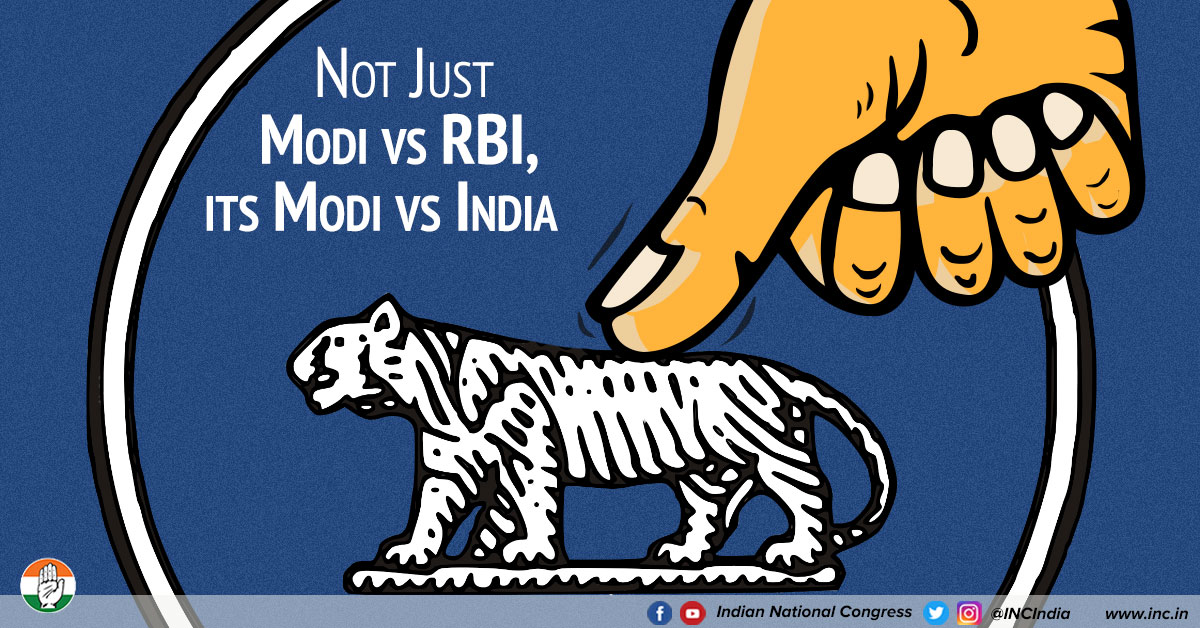 Not just Modi vs RBI, Its Modi vs India

It started with Modi vs SBI – when the government forced the largest Indian bank to bail-out failures of the BJP govt., then went on to become Modi vs CBI – when the CBI director was shoved out of the CBI for probing into the Rafale scam, and now it has come to Modi vs RBI – when the central bank has refused to tow the populist line of the BJP govt., which has the potential to put the already reeling Indian economy at severe risk.

The contentious issues between the RBI and the Modi government

As reports have started trickling out of the closed and undemocratic Modi government’s strongbox, the rifts of the long-drawn conflict between the government and RBI has become increasingly manifest. The rift began with demonetisation, when the RBI board of governors warned the government that the much touted Demonetisation will not be any help in curbing the menace of black-money. The RBI’s argument was simple, “Most of the black money is held not in the form of cash but in the form of real sector assets such as gold or real-estate and… this move would not have a material impact on those assets,”. The RBI also added that, "while any incidence of counterfeiting is a concern, Rs 400 crore as a percentage of the total quantum of currency in circulation in the country is not very significant.". The board also warned the government against the possible impact of such a move on two sectors, specifically, medical and tourism. In response, the government assured that since the move is under consideration for some months now, all measures have been taken into consideration to make sure that it does not cause any inconvenience to people in dire situations. However, reality is starkly opposite to government claims, and is manifested by the unfortunate fact that more than 100 people lost their lives during the ill-planned move. Moving on. The government did not, as is proven by now, take such dissenting opinions well and this reflected in the government’s dissatisfaction with the RBI, later.

Another contentious issue between the RBI and the government appeared on the issue of dividends that the RBI pays to the government. There are two aspects to this:

Now, the fact of the matter is that the above two points form the basis of the second issue of contention between the Modi government and the RBI. Despite the fact that the RBI incurred huge costs due to the move, the Modi government is coercing the RBI to pay the government on top of yearly dividends. During the 2016-17 RBI financial year, the government coerced the RBI into paying an additional Rs. ten thousand crores as dividends, and again, this year the Modi government is demanding an additional Rs. 3.6 lac crores – which is 1/3rd of the total RBI reserve, and a figure similar to the windfall gain expected out of demonetisation. Let us repeat it to you – the government wants the RBI to let go 1/3rd of its reserves, or Rs. 36,00,00,00,00,000! Its blackmail, it’s like holding someone hostage, it’s PM Modi’s politics! The government has failed abysmally, the sentiments are against it, and PM Modi is losing face. Its logical that the BJP government has spent record sums on advertisement. In the last four years, the Modi government has spent approx. Rs. 5,000 crores on advertisement, and the huge demands are surely to announce more Jumlas, irrespective if it puts the Indian economy at risk.

Last but not the least. The third issue of contention between the Modi government and the RBI are RBI’s PCA (Prompt Corrective Actions) measures that are in place due to rising NPAs and, consequently, losses incurred by banks. The economy under the Modi government is in the doldrums. The illogical and ill-implemented moves such as Demonetisation and GST have had severe consequences on the Indian economy: unemployment is at a 20-year high; GST collections are averaging Rs. 90,000 crores per month against an expected Rs. 1-1.25 lac crores per month; till September, total income tax receipts were only 39% of targeted figure; against a full-year target of Rs 80,000 crore, the government has sold PSU equity worth only Rs 15,289 crore through the divestment programme. Everything points towards a slowing economy, and this has been the case throughout the term of the Modi government, except one: next year is election year. Since, the nation goes to general elections next year the Modi government is desperate to present a rosy picture, and hence, its coercing the RBI to ease the PCA measures – putting already weak banks that are on life-support system at further risk. RBI has the powers under the PCA to place curbs on lending, new branches and dividend distributions “to prevent further haemorrhaging of their balance sheet” of the banks while they are nursed back to health. Unless the RBI eases its PCA measures, these banks cannot freely lend or expand, which should be the case, as these banks are trotting a fine line. But for the Modi government electoral gains triumphs nation’s interest, and therefore, the coercion.

These are not the only issues of contention between the government and the RBI, but the most important ones. The stand-off has become so heightened and the situation so dire, the Modi government has gone as far as to invoke Section 7 of the RBI Act, 1934 – a first in the history of India. Section 7 empowers the central government to issue directions to the RBI – an independent institution of India. However, despite there being provisions under the Act to be used in case of emergencies, one thing that should be kept in mind is that this provision was never used in the history of India, even during severe crises such as the one in 1991. The independence of the institutions of our country are sanctimonious, and should not be compromised at any cost. However, PM Modi has left no stones unturned to compromise the sanctity of our institutions. He has appointed his ‘blue-eyed boys’ at the helms of various institutions in order to compromise those institutions, but in an instance of poetic justice, all of them have stood in the way of PM Modi when it comes to national interest, as no one is willing to stoop as low as Modi.