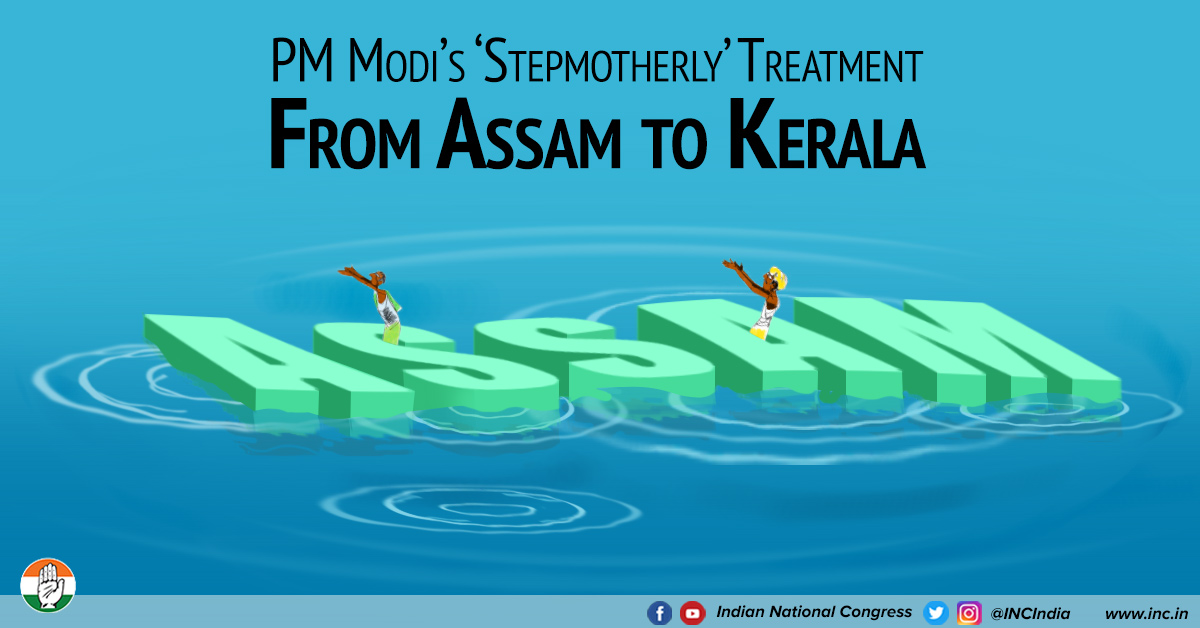 The recent flood in Kerala has revealed a gruesome example of the ferocity of a turbulent river, but that was not the only lesson that we learnt. The centre’s insensitive and timid response to the flood ravaged region in southern India reveals the PM Modi-led government’s ‘stepmotherly’ approach towards people of India, especially southern India – where the BJP consistently fails to perform. Unfortunately, that is not the only instance of PM Modi’s ‘stepmotherly’ treatment – Assam being another.

When it comes to floods, Assam has often been at the receiving end of this calamity. An analysis of the Assam State Disaster Management Authority’s (ASDMA) data reveals the severity of the distress that Assam has been facing in the past years. In Assam, the number of people displaced due to floods since 2014 is as follows:

Despite the severity of the issue – as reflected by the numbers above, and despite the report of the central team in 2017, which categorically stated that “profound and large-scale” damage has been caused by the floods, the centre has not allocated a single rupee to Assam under the National Disaster Relief Fund (NDRF) since 2014-15, as per data accessed from the Ministry of Home Affairs website. As per reports, Assam requested an assistance of Rs. 9370 crores in 2014, Rs. 2100 crores in 2015, Rs. 5038 crores in 2016, but, in 2017, when the BJP government came to power in the state, the state of Assam requested no assistance from centre even though the state government pegged the losses to approx. Rs. 4000 crores. This points towards a concerted effort, by both the state and central government, at denying the people of Assam their due resources. Whereas, the state government – a non-BJP government – in Kerala demanded its due right to resources. Are the states governed by BJP denying the people their due right to central resources, just to appease their ‘supreme leader’?

Although, the officials have come up with explanations such as ‘error in accounting’ to account for lack of funding to Assam out of NDRF, but this excuse begs the question – what kind of ‘error in accounting’ takes four years to resolve? Be it currency-note counting or keeping of books, the BJP-led government and institutions clearly have issues with mathematics. The BJP government at the centre ought to come clean on the discrepancies in their accounting division and why it has not been resolved in four years? Clearly, the central government’s incompetency has led to intensification of hardships for the people of Assam. It is the responsibility of the central government to provide all possible assistance to any state suffering from a natural calamity, despite the people’s beliefs or political affiliations or any ‘error in accounting’ on anyone’s end. However, unfortunately, the answer to such questions – no matter how many times asked – are already there for those who can see beyond the sham.  A person who believes in monologue – Mann Ki Baat – as dialogue, authoritarianism as discipline, and abandoning his family as service to the nation has clearly lost all empathy, and questions raised will only fall on deaf, unsympathetic ears, so that leaves us with only one solution – vote him out!