Rafale Deal: So Much for ‘Make in India” 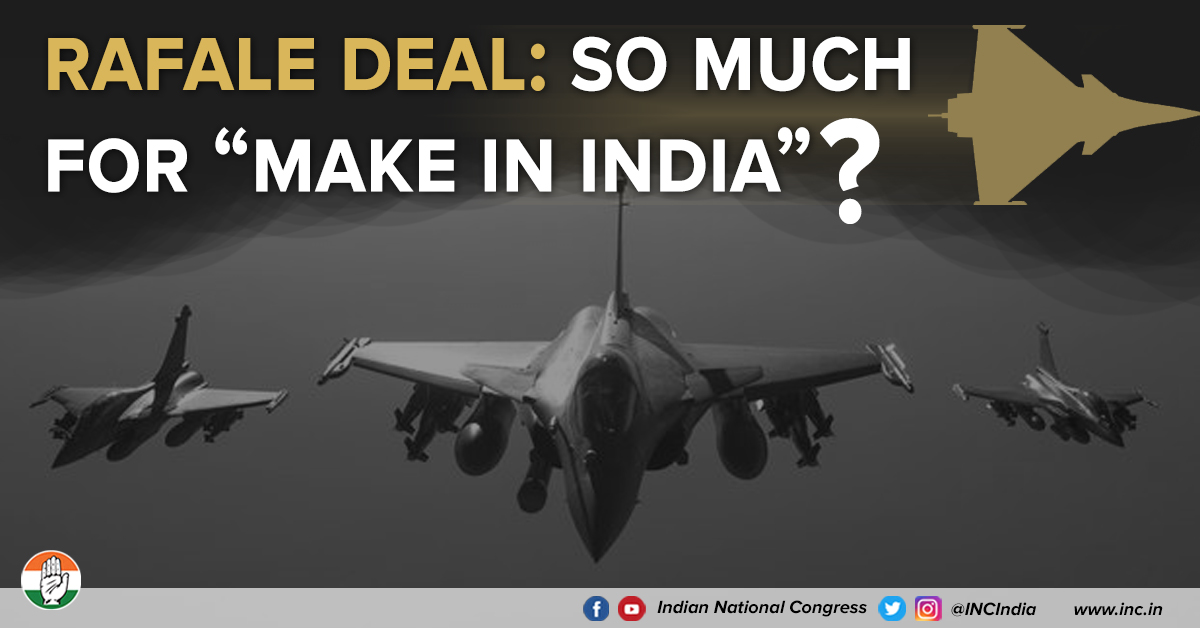 Rafale Deal: So Much for ‘Make in India”

There is no doubt that the diluted and reduced Rafale deal under the BJP government has brought about major losses to the public exchequer. Further peeling back the layers, we see a grim picture not just for the public exchequer but for India’s national security, country’s employment and possibilities of huge investments which have now been watered down to zero. Compromising the country’s national defence is scary enough in itself, more so, Mr. Modi’s conspiratorial silence on the issue reeks of a hysteria brewing amidst the Rafale scam.

Defence expert Ajai Shukla said that India needs anywhere between 200 and 300 fighters at the moment to replace the MiG-21 and MiG-27 fleet that is being phased out of service. The initial deal struck by the UPA in 2007 was a major gamechanger and gained widespread applause in the sense that not only did the deal cracked 126 Rafale fighters, but also included a process of acquisition of technology and a major role for the local manufacturers in the assembly and development of planes. The original deal included 18 airplanes at “fly away condition” and 108 planes to be manufactured in India post a major exchange of technology with France which marked a big step for the future of the Indian aviation sector. The contract of manufacturing was awarded to Hindustan Aeronautics Limited (HAL), a public sector enterprise and the central figure in the Indian aviation space. The agreement also required French company Dassault to invest 50% of its earned revenue in India. Large number jobs and investment was set to follow in India. Furthermore, the deal included lifetime maintenance by Dassault, serviceability, warranty and a unique built-in integrated missile system. The overall deal was seen as a major triumph.

Another major aspect often overlooked is the fact that the original deal of 126 Rafales was also a move towards consistency and standardisation of the Indian Airforce’s (IAF) fleet of jets. Maintaining a diverse fleet is a nightmare for ground forces. Thus, a homogeneous fleet of 126 Rafales was seen as a progressive move for the overall development of the Indian Air Force; by experts and defense personnel alike.

However, the current deal misses out on all parameters mentioned above. The deal has been watered down to simply an off-the-shelf buying of 36 aircrafts, all in “fly-away condition”. There are no other cost components included in the current deal; no maintenance, no service, no warranty, no investment in India, no domestic manufacturing and perhaps most importantly, no transfer of technology (ToT). Despite all the crucial miss-outs, the price per aircraft has ballooned from Rs. 526 crores to Rs. 1571 crores per aircraft. To add to the worry, the Indian contract has been taken away from HAL and given to private run Reliance RDL, which has zero prior experience in the defence sector. It is no secret that industrialist Anil Ambani, who owns RDL, shares close ties with Prime Minister Narendra Modi.

The single biggest worry about the present deal must be the fact that there is no ToT component. This not just raises questions about the current deal, but also jeopardises the Indian Air Force's growth trajectory. Never before have we seen a more blatant abuse of power and a bigger scam in the making.