SC’s Judgement: A Lesson in Liberty and Equality 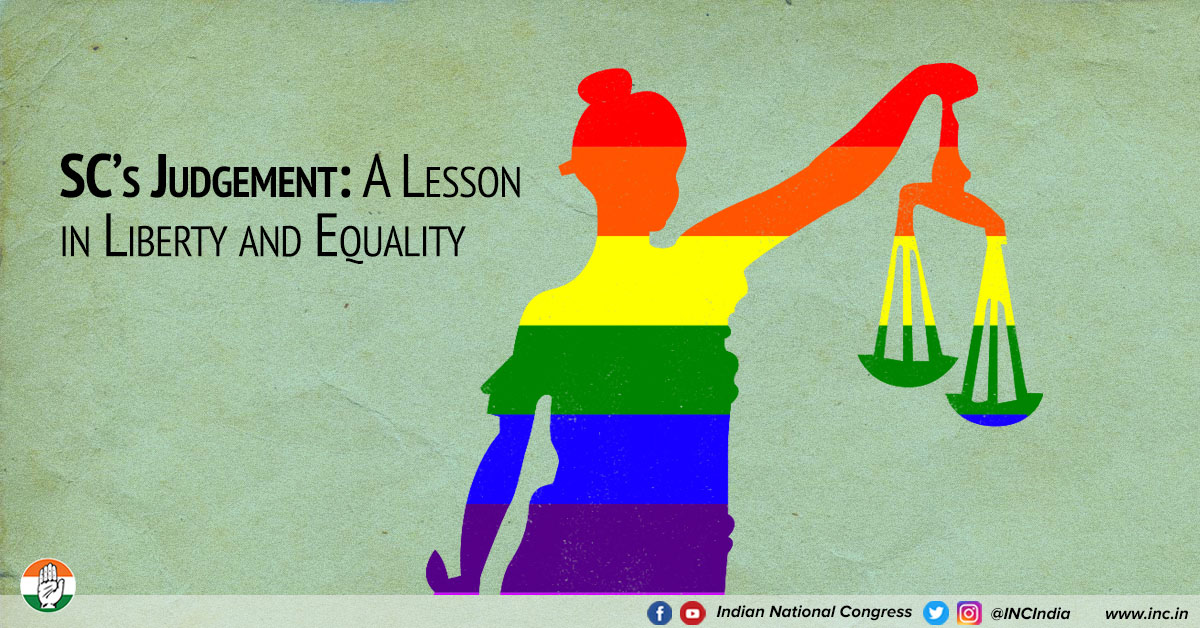 SC’s Judgement: A Lesson in Liberty and Equality

Yesterday’s Supreme Court’s (SC) judgement rationalising Section 377 of the Indian Penal Code was long overdue, but things have started moving and rays of hope have emerged. The Congress party has long supported this demand for liberty and equality of people irrespective of their gender or sexual orientation. The liberties and rights enshrined in the constitution speak to the Indian citizen, and, more importantly, it speaks of the Indian citizen, and the SC’s judgement should be seen in this light. The SC’s judgement is not just about sexual autonomy, but, more importantly, a holistic view reveals that the judgement provides astute remarks on liberty, identity, secularism, and majoritarianism, which apply on other aspects Indian polity too.

Liberty was the guiding principle in orders of all the judges of the five-judges bench. CJI Deepak Misra, calling sexual autonomy as a ‘personal choice’, emphasised that it cannot be separated from individual liberty. Justice Rohinton F. Nariman equated this liberty of sexual autonomy with fundamental right to live with dignity. Justice D. Y. Chandrachud called moral notions as ‘anathema to a constitutional order’, meaning that societal definitions of right and wrong cannot, and should not, be used to determine what will be permissible under the Indian constitution. This was also reaffirmed by the CJI when he spoke of ‘constitutional morality’ – based on the spirit of the constitution –  and about constitution’s role in transforming the society through ‘transformative constitutionalism’.

The CJI recognised that homosexuality is as much based on identity as heterosexuality, and we must respect individuals for what they are instead forcing them to become a reflection of our own image. This was also reaffirmed by Justice Indu Malhotra when she stated that discrimination on basis of innate nature of a person is violative of her/his fundamental rights. This reaffirmed that the identities of individuals have to be recognised and respected, and that identities of individuals are not constant, instead, in this fast-paced and rapidly-evolving world, new identities are being consistently constructed, and the Indian constitution – which is often referred to as a ‘living-document’ – will be receptive towards them all.

Justice Rohinton F. Nariman in his order touched upon another important matter, which has marred Indian polity and society for decades. In his order, Justice Nariman stated that state can only punish for matters that are within the ambit of what it considers as crime. Judiciary, which is one of the wings of the temporal phenomenon called state, cannot look into matters which relate to sin – it being spiritual concept. According to Justice Nariman, it is this failure to understand the difference between the two which led to a section such as 377. In our country, secularism is often understood as equal treatment of all religions, but this perception, usually, fails to understand that foundation of secularism was separation between state and religion. State is not responsible to hold other people accountable for your religious beliefs.

Speaking firmly against majoritarianism, CJI stated, “when the liberty of even a single person of society is smothered under... the perception that the majority population is peeved by the individuals exercises of his/her liberty despite it being within his/her private space, then signature of life melts and living becomes a bare subsistence...”. This statement clearly states that minority – no matter how small the number –  cannot be pushed around according to the whims of the majority.

Since the inception of the PM Modi-led government, attacks on freedom of speech and freedom of religion, among others, have led to liberty of the people being compromised; the RSS-backed regime has tried to impose a singular identity –  based on one culture, one language, and caste hegemony –  across India, which has undermined other identities; secularism, one of the founding principles of the nation, has been under constant attack to impose a singular religious identity; and majoritarian tendencies have led to undermining of institutions – both political and social. However, when we read between the lines of the SC’s judgement, we will realise that the answer to all these ills are already enshrined within the constitution, we just have to firmly stand-by our institutions and constitutional values. Our forefathers, who gave us this ‘living-document’, were indeed visionaries. Hence, the work of the Congress party has been cut-out. We agree that it seems intimidating, but it is very simple – just stand by our constitutional values. Hence, when Congress President, Rahul Gandhi, stated that these are matters of personal freedom and should be left to the individual, he was, taking cue from our forefathers, just reaffirming values that are already enshrined in the constitution. Therefore, if we want our beliefs and values respected, we must respect the beliefs and values of others. If we want liberty, dignity, and equality, we must allow liberty, dignity and equality. After all, a just society will not be realised unless we choose for our fellow citizens, what we would choose for ourselves.