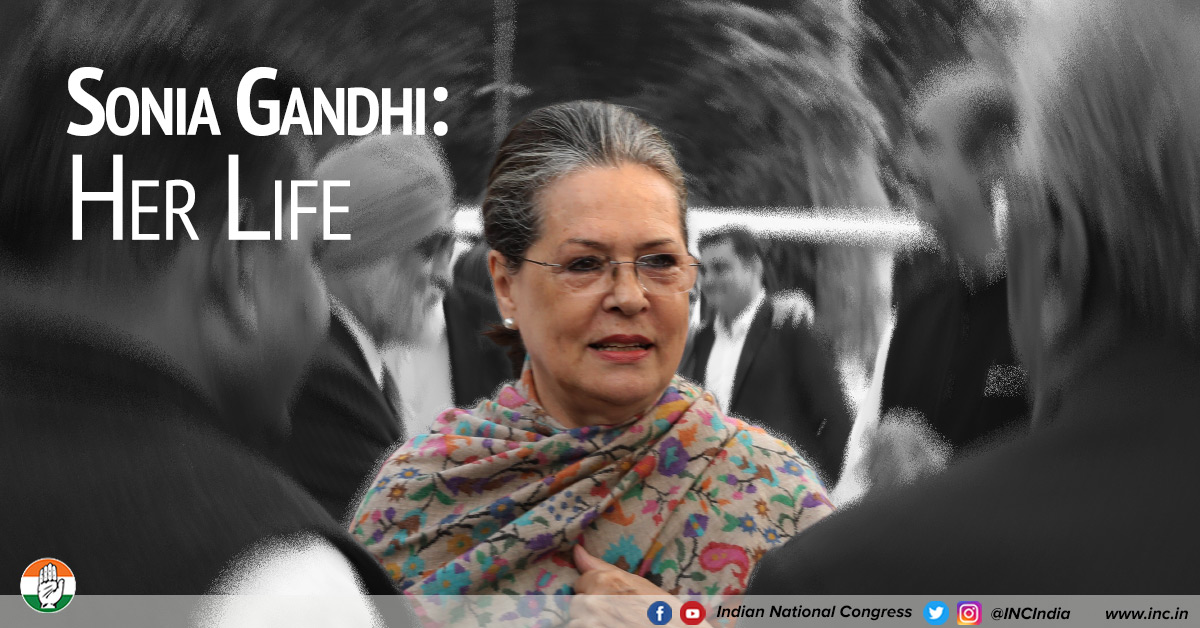 Sonia Gandhi was born on the 9th of December, 1946. After finishing her schooling at a young age of thirteen, she marched on to Cambridge to study English. It was there that she met Rajiv Gandhi who was completing an engineering degree from the Trinity College of the University of Cambridge. Rajiv Gandhi and Sonia Gandhi tied the knot in 1968 after which she settled into the residence of her mother-in-law Indira Gandhi, who happened to be the then Prime Minister of India. After her marriage, Sonia Gandhi dedicated much of her time caring for her family and took very little part politics. However she was a steady companion to Indira Gandhi accompanying her to a number of her formal official responsibilities. Sonia Gandhi later took over some additional responsibilities after her husband, Rajiv Gandhi, became the Prime Minister and then the Leader of the Opposition. During this period, she travelled with Rajiv Gandhi across the length & breadth of this country. She took to attending matters of health care and welfare undertakings in Rajiv Gandhi’s parliamentary constituency of Amethi, Uttar Pradesh.. However besides these additional responsibilities, Sonia Gandhi’s devotion and her impeccable affection and care towards her family only became stronger.

Sonia Gandhi was quick to finish her schooling by a very young age of thirteen where her teachers recalled her to be “intelligent, diligent and committed”. After accomplishing her initial education, Sonia Gandhi took to attending a foreign language school where she enrolled herself to learn Russian, French and English. She also went on to learn English from the University of Cambridge and it was here that she met Rajiv Gandhi; an encounter that would be blessed to become a union of marriage.

The early days for Sonia Gandhi after her marriage with Rajiv Gandhi did not involve great political undertakings. She remained predominantly a private citizen where she dedicated her time for the well-being of her family. In some instances, Sonia Gandhi helped her mother-in-law Indira Gandhi with her engagements of the office and also played the role of a hostess. Sonia Gandhi limitedly accompanied her husband Rajiv Gandhi in his visits across the country and in the foreign lands in his time as both the Prime Minister of India and the Leader of the Opposition in the Lok Sabha apart from focusing on many social welfare programs in Rajiv Gandhi’s parliamentary constituency of Amethi in Uttar Pradesh. The May of 1991 brought upon the horrendous assassination of Rajiv Gandhi. Sonia Gandhi to this terrible incident laid the grounds for the Rajiv Gandhi Foundation that happened to be a non-governmental organization along with its supplementary think tank, the Rajiv Gandhi Institute for Contemporary Studies. She headed these organizations as the chairperson and engaged in their efficient functioning for the social good as well as to venerate the legacy of her husband. Near a decade after the assassination of her husband and the then Prime Minister of India, Sonia Gandhi set her foot as a primary member in the Indian National Congress in the Calcutta Plenary Session in 1997. Sonia Gandhi dedicated her energy and campaigned for the party with utmost vigour and effervescence and her efforts fuelled the party to achieve a greater threshold. Soon after, in April 1998, Sonia Gandhi was handed the responsibility of the President of the Indian National Congress and became the vanguard of the party. Sonia Gandhi officially became a Member of Parliament from the parliamentary constituency of Amethi, Uttar Pradesh in the year 1999. Subsequently, she also became the Leader of Opposition in the Lok Sabha. The General Elections of 2004 saw the Congress securing the largest number of seats under the leadership of Sonia Gandhi. This victory was instrumental for the Indian National Congress to amalgamate a coalition government of the United Progressive Alliance. It was in this very election that Sonia Gandhi was elected a Member of Parliament Rae Bareli, Uttar Pradesh.

Sonia Gandhi as the President of the Indian National Congress:

Sonia Gandhi as the UPA Chairperson:

After the General Elections of 2004, the birth of the United Progressive Alliance took place that was a coalition of the centre-left political parties of the country. The largest political party of this coalition was the Indian National Congress and Sonia Gandhi became the chairperson of the United Progressive Alliance. During this period, Sonia Gandhi saw the overwhelming support for her leadership in the Parliament which meant she would be sworn in as the Prime Minister of India. However to the astonishment of her opposition as well as her supporters, Sonia Gandhi humbly declined the offer. On this occasion she said, “Power in itself has never attracted me, nor has position been my goal.” Instead, Dr. Manmohan Singh was nominated as the leader of the coalition government and was subsequently sworn in as the Prime Minister. Another fundamental role that Sonia Gandhi undertook was as the Chairperson of the National Advisory Council which was a forum that provided the government with recommendations and suggestions that were instrumental in the socio-economic well-being of the country. Sonia Gandhi as the Chairperson of the United Progressive Alliance government and the National Advisory Committee had a tremendous hand in the enacting of the National Rural Employment Guarantee Scheme, National Rural Health Mission, Jawaharlal Nehru Urban Renewal Mission, Mid-Day Meal Scheme National Rehabilitation Policy and the Right to Information Act among many others. On the 23rd of March 2006, a controversy broke out that accused Sonia Gandhi of holding office-of-profit and that the United Progressive Alliance was to issue an ordinance where the Chairperson of the National Advisory Council would be rendered immune from the view point of holding an office-of-profit. To this development, Sonia Gandhi announced her resignation as the National Advisory Council as well as the Lok Sabha only to be re-elected in May 2006 from her constituency of Rae Bareli with an even greater margin of over four lakh votes. On the 2nd of October 2007, Sonia Gandhi stood before and addressed the United Nations on the birth anniversary of Mahatma Gandhi which is globally observed as the International Day of Non-violence on account of a resolution passed by the United Nations on the 15th of July 2007. This was in response to the resolution passed by the Indian National Congress during the Satyagraha Conference that took place in the same year. Sonia Gandhi played an instrumental role in the United Progressive Alliance’s return to power in the General Elections of 2009. In this election, the Congress won a total of two hundred and six seats on its own. Sonia Gandhi soon resumed the role of the Chairperson of the National Advisory Council that was reconstituted on the 29th of May, 2010. Across her years as the UPA Chairperson, Sonia Gandhi maintained an unparalleled focus on addressing and enacting the issues related to the welfare of the underprivileged especially the women and children, the environment and a multitude of social welfare schemes.

Achievements and awards of Sonia Gandhi:

The following are the list of achievements, honours and awards of Sonia Gandhi: