The ‘Demon’ in Demonetisation 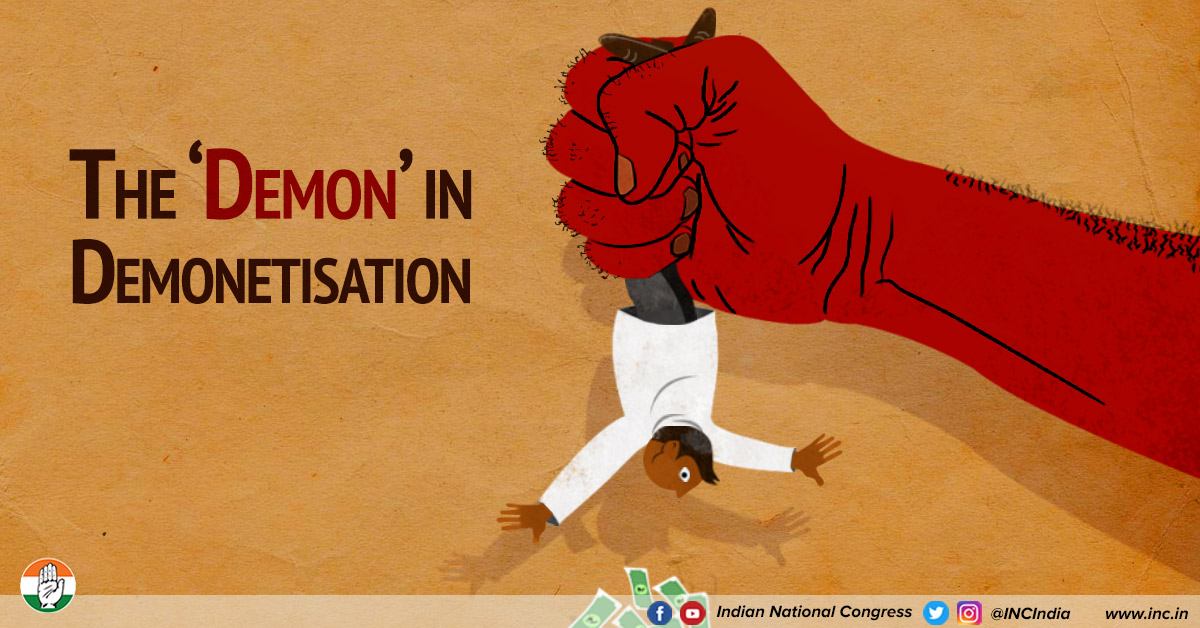 The ‘Demon’ in Demonetisation

On 8th November, 2016, Narendra Modi, in an authoritarian move, opened Pandora’s box. In his address to Rajya Sabha on the 23rd of November, 2016, Dr. Manmohan Singh said, “it will affect all those people who are in the informal sector of the economy… the GDP of the country can decline by 2 percent”. The words of former PM, Dr. Singh, proved prophetic as can be seen from the reports that have come out since the ill-fated move. The reports that have come out since have acknowledged the ‘elephant in the room’. The GDP growth slowed significant and subsequently India lost the status of the ‘fastest growing major economy in the world’. Various infra and other projects felt the heat as is evident from the monthly report of the Central Electricity Authority, which stated that various projects have cited demonetisation as a reason behind the delays. Modi came to power on the promise of job creation at the rate of 2 crores per year but in reality the complete opposite has happened. As per a report by the Centre for Monitoring Indian Economy (CMIE), which stated that 1.5 million jobs were lost during January-April 2017 post-demonetisation. A government that talks much about ‘Beti Bachao, Beti Padhao’ somehow managed to increase domestic violence, as reported though various studies and NGOs. There was clear spike in cases of domestic-violence post demonetisation. All this in addition to the extremely unfortunate incidences of more than 150 deaths during the ill-fated and ill-implemented exercise. Where is the accountability?

However, even if we ignore all of the above and just focus on demonetisation’s impact on the agricultural sector, which employs more than 50 per cent of the total workforce in India and contributes around 17-18 percent to the country's GDP, it should be enough to paint the picture of demonetisation’s failure.

The latest report by the Agriculture Ministry, which was later suspiciously (but expectedly) taken down, cleared the air on the impact of demonetisation on the biggest sector (employment wise) of the Indian economy. The report concedes that farmers were badly hit due to the move. The lack of planning is evident from the fact that demonetisation was implemented when the farmers were either selling their Kharif yield or sowing Rabi crops, and as per the report, “millions of farmers were unable to get enough cash to buy seeds and fertilisers for their winter crops. Even worse, landlords faced a problem such as paying daily wages to the farmers and purchasing agriculture needs for growing crops.”. This is evident from the fact that even National Seed Corporation failed to sell nearly 1.38 lakh quintals of wheat seeds because of the cash crunch, which did not pickup even after the government later allowed the use of old currency-notes for such transactions. How could it? The whole country was in queues. The agriculture sector is yet to recover from the shock of demonetisation, which is evident from the farmers’ distress that we are witnessing on a daily basis – the Kisan Mukti March being the latest example of it. There was severe slowdown in the agricultural sector of the Indian economy as the GVA growth – GDP minus taxes and subsidies – more than halved from 4.1 percent in 2016-17 to 1.7 percent in 2017-18, as per government data. This is due to the fact that food grain production fell by 2.8 percent during 2017-18 Kharif season. However, this is not the only criticism that demonetisation has received. It has been criticised from all walks of life. We have listed a few below.

Two years after demonetisation several facts have come to light, like the case of exorbitant post-demonetisation deposits in ADCB – where Amit Shah is president – and other such banks headed by BJP leaders, and the subsequent exponential rise in BJP’s income. Such facts have shifted the ‘demon’ of demonetisation from an ill-implemented move to an ill-intentioned move. Now, the questions are not about the shifting goal-posts – which the government has resorted to since two years – but about the real intentions behind the move? Was it an attempt at remonetising the BJP?