The year 2018 when India resisted 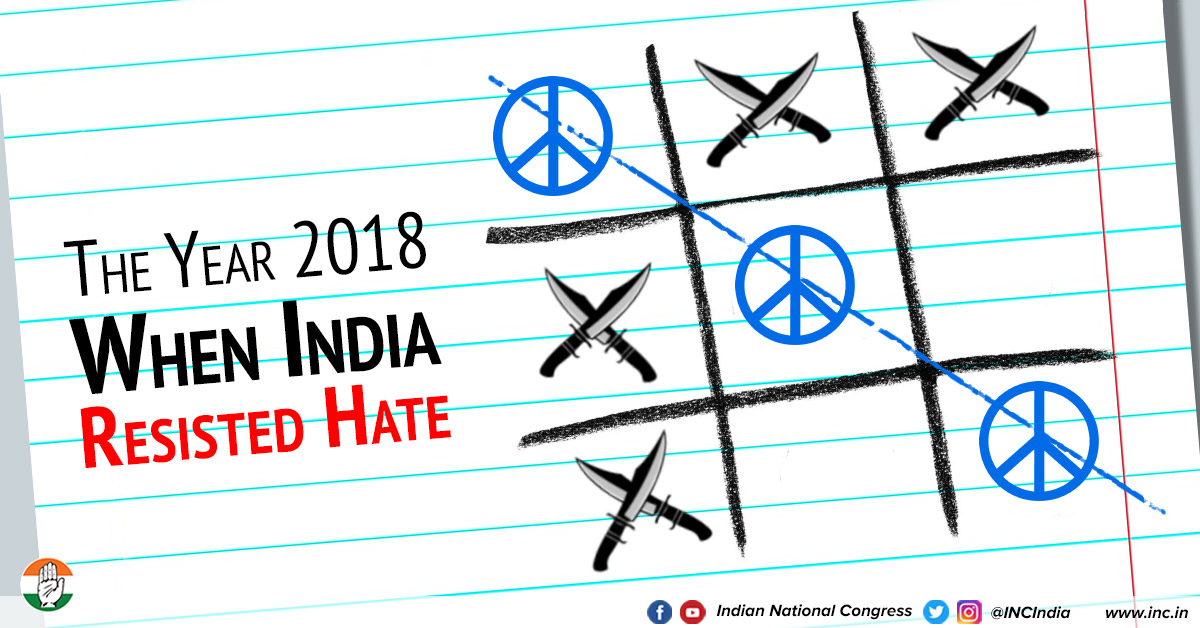 The year 2018 when India resisted

2018- the year in retrospect will be remembered for the tumultuous political roller coaster ride with its fair share of ups and downs. In a year marred by corruption scandals and horrifying incidents of violence, there were moments of silver lining- the country witnessed its own MeToo movement which received an overwhelming support, politics had its own refreshing moment when Congress President Rahul Gandhi broke all norms to go over to the PM in the parliament and embrace him and there were plenty heart warming instances when the country came together as one to stand up against injustices.

The government has turned into a hate mongering, polarising entity which thrives off an atmosphere of distrust, hostility and deceptions. From swindling lakhs of crores’ of tax payers’ money on shady defence deals like the Rafael, shielding crony capitalists like Nirav Modi and Mehul Choksi to maintaining complete silence on the heinous crimes carried out against women and minorities, the Modi government has not given India many reasons to celebrate this year. The Congress party however, has tried to usher in hope by standing up for the rights of the people, especially the down trodden masses. With Rahul Gandhi at the helm, Congress party has patiently tried to subvert this government’s agenda of negativity through its own message of positivity. Carrying forward the Congress ideals of truth, tolerance and love, Rahul Gandhi sought to defeat the lies and vitriol spewed by the BJP government with his own message of empathy and understanding. In what became one of the most memorable highlights of this year in politics, he walked up to the PM in the Parliament and hugged him, despite all the malicious attacks and trolling that the BJP has unabashedly indulged in. The act symbolised and embodied a powerful message- the power of fighting hate with love and the triumph of truth. This message resonated with the people of the country and it was obvious from the sweeping election victories for Congress in Chhattisgarh, Madhya Pradesh and Rajasthan. Once considered as BJP strongholds, these states rejected the politics of jumlas and elected a government that would safeguard their rights and provide good governance.

2018 was the year of murky deals, rampant corruption within the government, exponential rise in hate crimes, clamp down on media and judiciary and assault on democracy. But it was also the year when Indians resisted. We as a country, stood up against divisive politics, against growing violence against women and against incessant attempts to alienate and polarise. It was the year when we chose truth over lies, unity over divisiveness and love over hate and violence. As the year approaches its end and we prepare to welcome a new year, let us remind ourselves to stand against any attempt at polarisation, reject diversionary politics and strive to build a country which protects and promotes the rights of all.