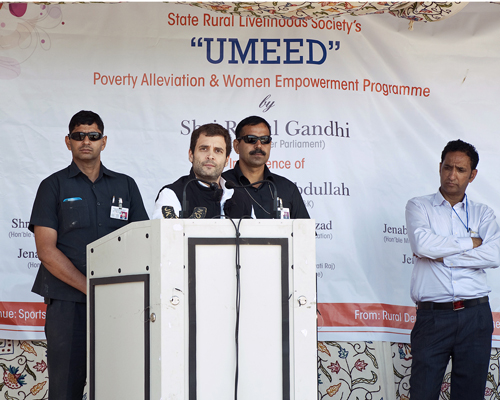 Congress Vice President, Shri Rahul Gandhi, said this morning that all the people of Jammu and Kashmir should be part of the development process and development should take place at a rapid pace in the state.

Shri Gandhi was speaking at Budgam in the Kashmir valley on the occasion of the state-wide launch of Umeed.

As the Centre and the State government would be contributing funds in a 90:10 ratio and the four districts would remain in sharp focus in the current financial year, Umeed is being extended to all the 143 blocks in Jammu and Kashmir.

With ten members in each of the proposed 90,000 Self Help Groups (SHGs), nine lakh women in the State are being associated with the campaign.

Building low-cost sanitation units, to eliminate the menace of unhygienic conditions and open defecation, is going to be among Umeed's several activities.

'Look at any state, wherever the women have come forward, where the women have been self reliant that state has made real progress, there has been real development in that state,' said Shri Gandhi.

The Congress Vice President gave the example of states like Kerala, Maharashtra, Tamil Nadu and Andhra Pradesh, where women had joined politics in large numbers, where they have come together to form co-operatives, where women have been at the forefront of running various programmes, it is these states which have made progress.

'We are hoping Umeed will bring similar success in Jammu and Kashmir as well', said Shri Gandhi. 'We want to include women in the development process,' he added.

Shri Gandhi shared an experience from his home constituency of Amethi with the large number of women who had gathered to hear him at Budgam. He said over the years he had asked several people, including senior officials from the Planning Commission what was the exact definition of poverty. But he had never quite got a satisfactory answer.

A satisfactory answer, said Shri Gandhi, eventually came from a village woman in Amethi who told him that when she was poor she had no self confidence. Now that she had self confidence, she was no longer poor.

Shri Gandhi told the assembled crowd that it was important to be self confident. If people were self confident, they would be in a better position to develop. Development comes from self confidence, he said.