Will the RSS sue Sardar Patel as well? 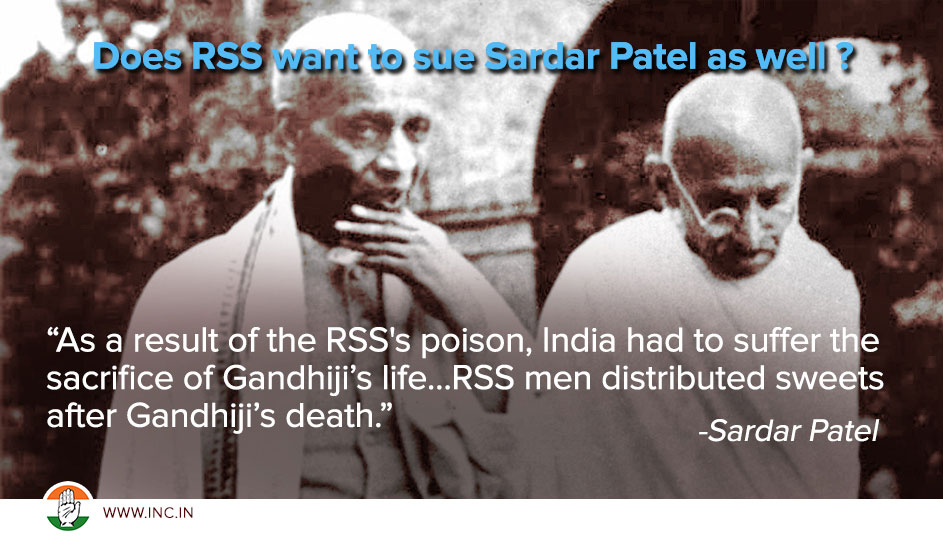 Will the RSS sue Sardar Patel as well?

If the RashtriyaSwayamsevakSangh has its way, they would file a defamation suit against SardarVallabhbhai Patel. After all, the organisation is planning to sue Congress Vice-President Rahul Gandhi for doing just one thing: echoing the views of Sardar Patel.

Sardar Patel, the man who unified our nation, was the first to point out the threat the RSS poses to India's unity. After Mahatma Gandhi was assassinated by a religious fanatic, Sardar Patel advocated a ban on the RSS.

'The activities of the RSS constituted a clear threat to the existence of the Government and State," he wrote in a letter.

"Individual members of the RashtriyaSwayamsevakSangh have indulged in acts of violence involving arson, robbery, dacoity and murder and have collected illicit arms and ammunition. They have been found circulating leaflets exhorting people to resort to terrorist methods, to collect firearms, to create disaffection against the government, the police and the military," read the ban notification issued by the Home Minsitry headed by Sardar Patel.

Sardar Patel was firmly of the opinion that the communal poison spread by the RSS was responsible for the Mahatma's assassination.  'As a final result of the poison, the country had to suffer the sacrifice of the invaluable life of Gandhiji,' he wrote in a letter. Sardar Patel said that people's opposition to the RSS grew when 'the RSS men expressed joy and distributed sweets after Gandhiji's death.'

The BJP's Prime Minsiterial candidate might build infinite statues of Sardar Patel but nothing can alter the fact that this great patriot was a steadfast opponent of the RSS and its divisive brand of politics.