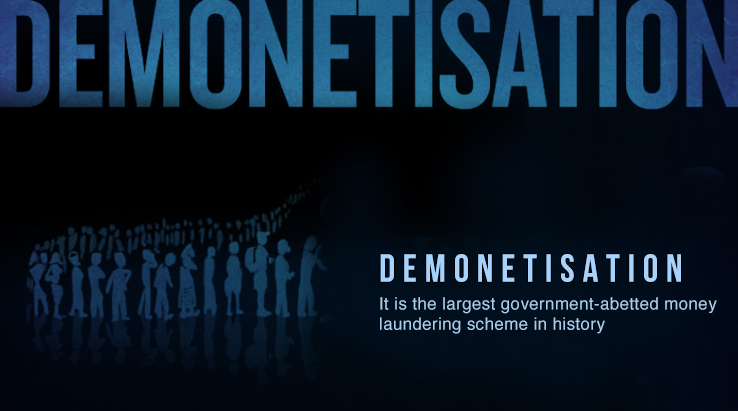 On November 8th, 86% of India’s currency was nullified in an effort to clean out “black money” and “counterfeit notes”; this effort resulted in a massive disruption to the existing social, political and economic functions of the world’s second largest emerging market. All 500 and 1,000 rupee notes were instantaneously voided, and a 50-day period ensued where the population could (ideally) redeem their cancelled cash for freshly issued 2,000 and later 500 rupee notes or deposit them into their respective bank accounts.

In the ensuing days after Demonetization, the public in general was hit quite bad, but it was the poor who took the largest share of pain. The poor and the lower middle-classes that constitute the vast majority of the population, simply did not have the access to structural and cultural resources needed to adapt to such shock economics.

Even the banks, debuted to do all the heavy lifting on the ground, weren’t kept in the loop; ill-equipped for the crisis and unable to make sense of an outlandish government order, they still managed to do a remarkable job despite not even having an adequate supply of new notes to balance out the nullified currency. With 86% of existing cash that was in circulation having been demonetized, the Indian Economy came to a sudden, screeching halt.

Trade across all facets of the economy was disrupted, and cash-centric sectors like agriculture, fishing, and the voluminous informal market, were virtually shut-down. Many businesses and livelihoods went under completely, not to mention the economic impact to the country when you have millions of productive people just standing in line for hours and hours, just to exchange or deposit cancelled banknotes, rather than working or running their businesses.

Even the undeclared emergency in the newsrooms failed to contain the news spreading like wildfire throughout India: Demonetisation was a colossal and completely avoidable failure and the largest government-abetted money laundering scheme in history.

Demonetisation failed to curb black money as 99% of the withdrawn 500 and 1000 rupee notes were returned, according to the RBI. This was expected as black money isn’t usually stored in currency, but property, bullion and more easily convertible currency like dollars. Thus, the dichotomy between ‘Black Money’ and ‘Black Wealth’: one is a flow variable and one is stock variable. And no amount of demonetization can bring about any change in stock variables. The claims of unearthing large amounts of black money are unfounded and based on a naïve and uninformed view of what actually constitutes black money.

Furthermore, the announcement failed to stem any sort of terror attacks and insurgency as there were 23 more attacks in Kashmir alone after the announcement. There were numerous reports of insurgents caught with large hordes of new currency on the Indian border.

It failed to produce a cashless economy as whatever rise in e-commerce sales took place during that period, returned to the same growth trend-line as before in a matter of few months, when cash supply was finally normalised. Considering the extent of the Indian unorganized sectors, it was simply illogical to even attempt digitalisation before creating an alternate payment infrastructure.

As a result of this catastrophic move, 3 lakh crore rupees in national income was lost; a conservative estimate given the informal cash-based economy accounts for nearly 50% of GDP or 65.25 lakh crore rupees. Some bank managers grew rich from the haircuts they took on people’s hard-earned money, quickly forming a sophisticated and organised money laundering racket. Meanwhile, a 115 people died as a direct result of the ‘note-bandi’—almost all were poor. Even after the supportive mainstream media declared demonetisation a failure, PM Modi has still not been able to bring himself to condole with their bereaved families or pay them any compensation for the loss of in many cases, their primary breadwinners.

The demonetisation move represents not just a faulty economic policy but also holds high potential for indiscriminate state surveillance, violation of privacy and abuse of civil liberties, with the replacement of cash payments with digital payment systems. With big data analytics growing bigger day by day, personal data of private citizens have turned into commodities on the grey markets, that may result in a breakdown of basic social-contracts and trust between the state and its citizens.

The end truth is, the Prime Minister expected to make a tidy profit of 4 lakh crores from dispossessing those who weren’t able to exchange their notes. Instead, 21,000 crore rupees of our tax money was squandered on printing notes, while only 16,000 crores were left unclaimed.