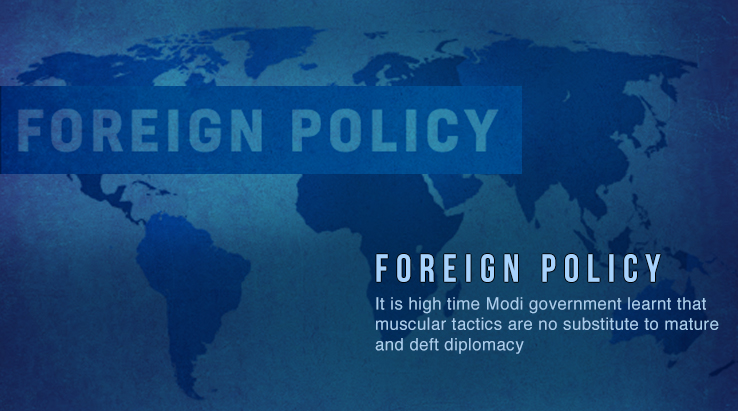 The BJP Manifesto for the 2014 General Elections stated that the party “believes that political stability, progress, and peace in the region are essential for South Asia’s growth and development.”

At the time of the Prime Minister’s swearing-in, 8 Heads of States were present to see India transition from one government to another. It was a bold statement of intent from the Prime Minister showing to the world that for India, its South Asian neighbours mattered. This was later enshrined in a hollow ‘Neighbourhood First’ doctrine, a part of a series of flashy but often conflicting foreign policy ambitions.

Looking back at the last three years, India’s foreign policy has achieved little in terms of strategic gains. The “Neighbourhood First” policy has degenerated into a “Neighbourhood Lost” policy wherein India has become the isolated and generally distrusted next-door neighbour. There are major grievances against New Delhi that are commonly shared among many South Asian nations today. Numerous serious allegations have been raised regarding India’s attempt to bully its smaller neighbours and interfere in their local politics.

Let’s start with Nepal, which adopted a new constitution in September 2015. In the aftermath, protests by Madhesi protesters blocked the supply of essential supplies to Nepal. India was accused by the neighbour of putting in place an undeclared blockade. Kathmandu even complained to the UN, prompting a response from the Secretary-General on “Nepal’s right of free transit as a landlocked nation as well as for humanitarian reasons.” India was also accused of trying to topple the K.P. Oli government as a result of which the long-held perception of India as a friendly ally has taken a major hit in Nepal. Furthermore, there are allegations that India interfered in Sri Lanka's elections in 2015. The recall of R&AW's Colombo Station Chief gave rise to further speculations. Despite the change in government, Sri Lanka is no closer to India, recently declaring itself “neither pro-India nor pro-China.” However, both Nepal and Sri Lanka have subsequently made overtures courting China.

Our relationship with Bangladesh, a country that India shares a historically rich and prosperous relationship with, is also seeing signs of stress. As the Rohingya crisis in Myanmar escalates, opposing takes on the stateless Muslim Rohingya refugees has put the onus of responsibility on an already resource-constrained Bangladesh. As they work towards providing a solution to this humanitarian crisis, India has washed its hands off the affair and taken the side of the Myanmarese government. The Modi-led government has also stated its intention to forcibly deport the Rohingya already taking shelter in India; this, despite multiple pleas from Indian politicians asking the government to respect the principles of asylum and India’s millennial humanitarian traditions. The goodwill with this neighbour, the result of a successful ratification of the Land Boundary Agreement in 2015—a by-product of the Land Boundary Protocol in 2011 (a UPA-era win)—can now be seen to be slowly eroding.

Even in Afghanistan and the Maldives, India’s diplomatic relations with the two countries have reached an impasse. When Ashraf Ghani, President of Afghanistan visited India during the first year of this NDA government, no progress was made on the India-Afghanistan Strategic Agreement, nor were any significant bilateral agreements signed between the two countries during the visit.

India’s Russian ties are also beginning to fray. The recent fighter aircraft deals with France and other military hardware purchases from the USA have resulted in sidelining India’s usual defence partner, the resultant diplomatic faux-pas could have been avoided had there been better guidance from the top. This has majorly strained Indo-Russian relations, resulting in Russia deepening its military ties with Pakistan instead. At the 2016 BRICS summit in Goa, India’s demand to name two Pakistan-based terror groups as perpetrators of anti-India terrorism did not find backing from Russia, a clear sign of the possible break-up.

Coming to China, though the recent Doklam stand-off ended without incident, the terms of the de-escalation remain hazy. Follow-up reports after the withdrawal indicate that there were more Chinese troops on the plateau than ever before. It is clear that India's handling of the Chinese dragon has been less than adequate under Modi.

As is clear, for all the hoo-ha around this government’s approach on the international stage, very little of either substance or success has been witnessed. Once you separate the rice from the chaff, one is left with a picture that illustrates a critical breakdown in foreign relations, particularly in parts of the world where it matters most.

All in all, the decline in relations between India and its sub-continental neighbours under the current government is best summed up in the words of one seasoned commentator, “In its over-enthusiasm to control small neighbours, the BJP-led government has only made India’s relations with them worse than ever before. When will the BJP understand that muscular tactics cannot replace mature and deft diplomacy?”