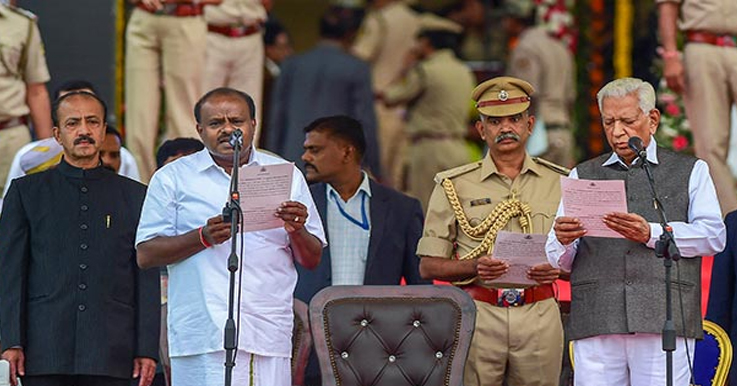 HD Kumaraswamy has taken oath as the Chief Minister of Karnataka and G.Parameshwara as Deputy Chief Minister, eight days after the Congress-JD(S) post-poll alliance was announced with a full majority. After an ill-fated attempt to form the government without sufficient seats, the BJP’s BS Yeddyurappa resigned as Chief Minister a mere 55 hours after being sworn in.

Mr. Kumaraswamy said, "I have limitations as a head of the coalition government. I have to take our coalition partners into confidence."

Despite heavy rains, the swearing was attended by large crowds and leaders of several regional parties. These included Sharad Yadav, Akhilesh Yadav, Mayawati, Mamata Banerjee, Sitaram Yechury, Pinarayi Vijayan, Arvind Kejriwal Chandrababu Naidu etc. Congress President Rahul Gandhi and UPA Chairperson Sonia Gandhi were also present for the swearing-in ceremony, where they met members of the opposition. This is a message to the BJP that the people and the opposition are united against them.

Apart from the post of Chief Minister, the JD (S) will have 12 ministerial posts and the Congress will have 22. The floor test will be held on Friday.