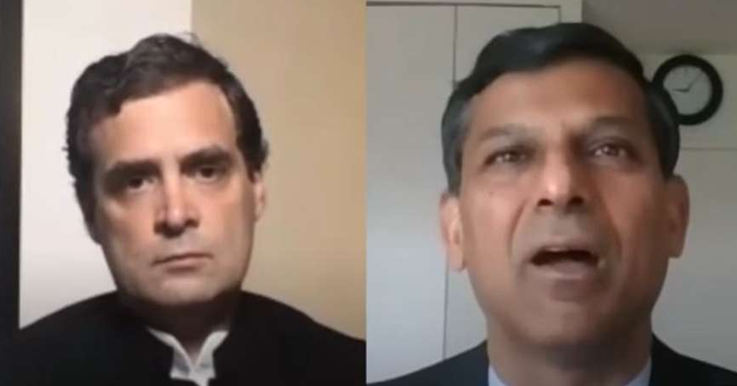 Senior Congress leader Rahul Gandhi kick started his first on many series of dialogues with economy and health experts, with the first one being with former Reserve Bank of India (RBI) governor Raghuram Rajan.

The former Congress president spoke to Mr Rajan about the critical issues related to COVID-19 and its impact on the economy. During their conversation, Mr Gandhi asked about the measures and means on how to revive the economy currently amidst the crisis the world is facing due to the coronavirus pandemic.

Mr. Rajan said that unemployment numbers that India is looking at are really worrying and that the country needs to be "cleverer" about lifting the lockdown.

"The numbers are really worrying. If you look at CMIE, virtually another 100 million more people have been put out of work as a result of COVID. 50 million through unemployment and 60 million through leaving the labour force," he said while answering Mr. Gandhi’s query that India had a high level of unemployment before the lockdown, which is now going to be massive.

"I think it says, we need to open up in a measured way but as fast as possible so that people start having jobs. We don't have the capacity to support people across the spectrum for too long. Being a relatively poor country, people start out with significantly lower reserves," Rajan added.

He further said, “But we have to be cleverer about opening up. Perhaps do mass testing. Take a mass sample, say 1000 samples and check in mass, if there is any sign of the virus in those mass samples. If you do find it, then go deeper into the sample and check who it might be. This way it would reduce the burden on our test infrastructure and can allow us to try and vet much more. We have to be cleverer since we simply cannot wait till we have that kind of testing."

The former RBI Governor claimed that it is all too easy to cover a lockdown forever, but by all means it is unsustainable for the economy.

On the opening of the economy, he stated: "It has to be sequencing. First, places where you can maintain distancing. It is not just distancing in the workplaces, but also distancing to and fro, from the workplace."

When Mr. Gandhi asked him about finances of the agricultural sector and the workers, migrant workers, Rajan replied that the government should look for ways of getting both money and food through PDS to as many people that they can.

"This is where the efforts we have made in direct benefits transfer (DBT) need to be relatively poor people, we need to take a call on that. We have different ways of accessing - through widow pensions MGNREGA Rolls. And we need to say that these are people who don't have a job, who don't have a livelihood and for the next 3-4 months while the uncertainty is on, we are going to support them”, he said.

Further, Mr. Gandhi said, “There is a sense in India that the testing capability is in itself limited, to which Raghuram Rajan replied, “Take the USA for now. It has ramped up to 150,000 tests a day. But the consensus among the experts, especially the epidemiologists is that to really be confident about opening up is that you need to triple that to about 500,000 tests per day at least and some are talking of tests in millions. Just multiply by 4 and half for India’s population. You are talking about 2 million tests a day if you have to get the level of confidence you have in the United States. Clearly, we are nowhere near that at 25,000-30,000 tests a day. But we have to be cleverer about opening up. Perhaps do mass testing.”

Apart from economics, Rahul Gandhi will also be having dialogues with health experts and experts in different fields on the effect of the novel coronavirus. This is how the Congress party makes informed and well-backed decisions. #CongressShowsGovernance