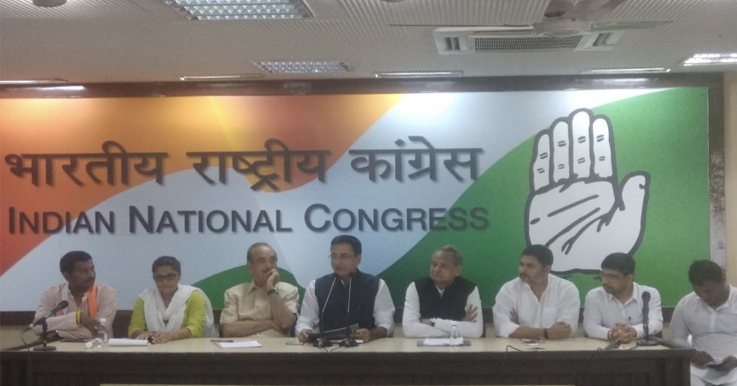 The Congress party is observing 26th May as Betrayal Day, on the 4th anniversary of the Modi-led BJP government coming to power. In a press briefing today, All India Congress Committee Media Incharge R.S. Surjewala said that after four years of betraying the people of India, the BJP should be officially renamed as the Betrayal Janta Party. In the last four years, Modiji has advertised worth Rs. 4600 crores, he is permanently in campaign mode while he snatches the peace from Indians. Mr. Surjewala said that four years of Mr. Modi can be described in four words – treachery, trickery, revenge, and lies.

Ashok Gehlot General, Secretary AICC said that an atmosphere of fear, hatred, and violence had been created in the last four years. In every family and section, people are upset. What happened to the promises Mr. Modi made while traveling through the country? There has never been a Prime Minister like Mr. Modi who has reduced the dignity of his office.

Ghulam Nabi Azad, Leader of the Opposition, Rajya Sabha, said that during his campaign PM Modi exploited the idea of national security to the hilt. Yet today, he has been unable to secure the territorial integrity of the country, the nation does not feel safe or secure, minorities, vulnerable people are not safe, there is no freedom of expression and media people are not safe. No one is safe under Modiji’s government, everyone is having sleepless nights.

Post-1996 since things normalized in Kashmir, the highest number of armed and security forces and civilians have been killed under Modiji's rule. The highest number of ceasefire violations have taken place. On foreign visits, Mr. Azad said, “PM Modi's recent visit to China is very mysterious. We have had this earlier also in the case of Pakistan. Is our PM so free that he can visit countries without agendas?”