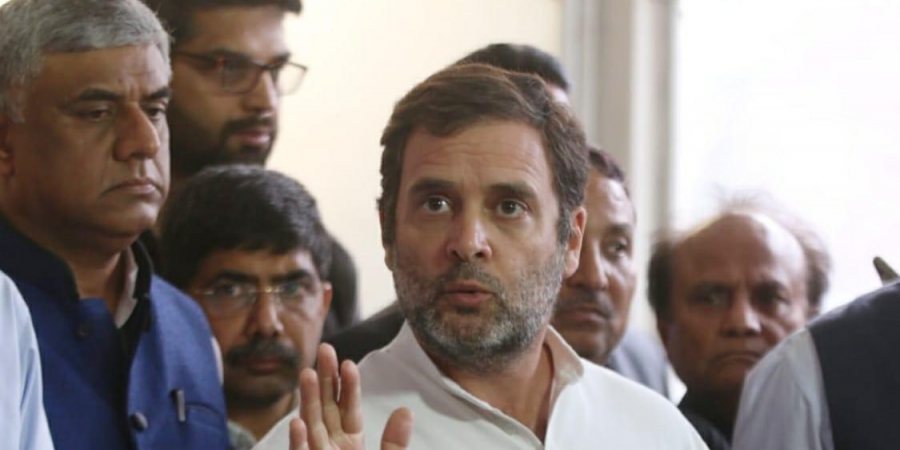 Shri Rahul Gandhi, in a special media byte at the Parliament said, “I am here making a statement about the economy of India. This is the most important thing that the country is facing right now. Who is in my team, who is not in my team, what else is going on, is of no consequence. What is of consequence right now is that millions and millions of people in India are going to suffer like they had never suffered before. And frankly I think, it is more urgent to raise such questions, because the real issue here is what is going to happen to crores and crores of people who are going to be decimated..

On a question if Shri Gandhi is referring to black money, he replied, “No! I am not legitimizing black money. I am saying that there were legitimate savings of poor people in their houses, in their villages, which you took away from that. Now you are busy spending your money trying to save YES Bank. You are taking money from legitimate people from the State Bank of India and you are giving it to save YES Bank. So, the whole idea is, you are trying to protect your 15-20 stakeholders and you have run roughshod over the economy. I am a member of the opposition; I am seeing a tragedy unfolding. I am seeing a monumental tragedy unfolding.”

Shri Gandhi said, “There is no preparation of Coronavirus. I have said it again and again in my tweets, there is no preparation. The Indian Government is asleep, they do not realize that Coronavirus is spreading in this country and it is going to have devastating consequences. Our Prime Minister is sleeping at the wheel. He does not understand these things, unfortunately, I am telling you, the Prime Minister of India is clueless about the economy, about how these things work and we are heading for an accident as a nation.

To another question, he answered, “I am not an expert and it is not my place to start giving you tactical answers to this question of what should be done on Coronavirus. There are experts, who understand what should be done. I am a leader of the opposition, I am signaling and I am bringing the attention of the people of India to a very serious problem. Central problem is that our biggest strength, which was our economy, has now become a huge weakness and a linked problem is that Coronavirus, which is playing havoc in the rest of the world, is right now playing havoc in India. But, the Indian Government is pretending that it is not. The Indian Government is absolutely refusing to accept that there is a problem, and so what I am proposing is that the Indian Government clearly tells the Indian people that listen we have a problem, this is the scale of the problem and we need to resolve this problem and this is how we are going to do this, but, none of that is happening. What we have seen is, we have gone from our Prime Minister giving his twitter account to seven women; to 'don't panic'; to no clear cut answers to any of these problems. So, that's why I want to bring the attention of the people to that.”

On What PM Should Do

On another question of what he thinks the Prime Minister should do, Shri Gandhi said, “First of all, the Prime Minister should explain to this country what his strategy out of this mess is. The Prime Minister should explain to this country, what he thinks is the strategy out of this mess is. There are ways out of this mess; we are not hearing any of them. I tweeted 3 or 4 times over the last month that Coronavirus is a very serious problem in India. Before, I tweeted it, there was nothing going on. After I tweeted it, the Prime Minister made one or two sort of comments about it. But, Coronavirus is not just a virus that is infecting people; Coronavirus is a very-very serious problem for our economy. It is a direct attack on the economy, so we have to start taking emergency measures now Frankly, it is too late. If you ask me, it is already too late, but, we need to start now, taking actions to protect the damage that is going to happen. That is why I am speaking to you.