This election is about the future of Karnataka and we will win: Rahul Gandhi 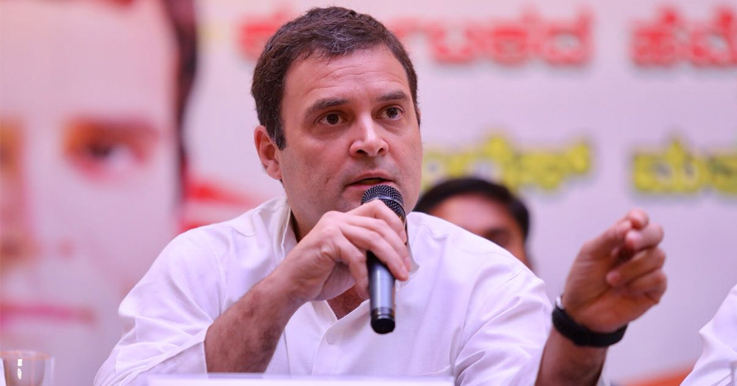 This election is about the future of Karnataka and we will win: Rahul Gandhi

As the campaign for Karnataka draws to a close with the state going to polls on the 12th of May, Congress President Rahul Gandhi said that he is confident of winning the election. Addressing the media at a press conference, something the Prime Minister hasn’t done in his last four years in office, Mr. Gandhi talked about the spirit of Karnataka and why he was certain the Congress would be re-elected y the people.

Mr. Gandhi accused the RSS and BJP of conspiring to snatch away Karnataka’s identity and to impose their own ideology. Slamming the BJP for calling him an "election Hindu", Mr. Gandhi said that the BJP did not understand what being a Hindu entails. Their definition is limited to their own perspective of the religion, the Congress President said. “As a leader of the political party, it is my job to visit the religious institution that invites me. I will however not go to a single institution that divides the society,” he added.

Mr. Gandhi questioned PM Narendra Modi on his silence, at a time when Dalits continue to be oppressed and attacked. The Karnataka government gives half of what the entire country gives to the development of Dalits and tribals, and the Modi government should be ashamed of this, he said. When asked about the issue of rape being politicised, Mr. Gandhi asked whether politicians should be quiet while women are raped in India. “Rapes are a political issue,” he said.

The Congress President took PM Modi to the cleaners on his criminal neglect of farmers. He said that while farmers were being ignored, the Modi government was giving Rs. 2,50,000 crores to the 15 richest people in the country, at the same time. Mr. Gandhi pointed out that while the Karnataka government had given over Rs. 8,000 crores to the farmers, Mr. Modi had done absolutely nothing. Mr. Modi says he fights for corruption while sharing a stage with BS Yeddyurappa, who has spent time in jail for corruption. The BJP has given tickets to the Reddy brothers, who stole 35,000 crores from the people of Karnataka. The Congress President asked PM Modi to explain why the CBI has turned into the Central Bureau of Illegal Mining. "Why are corruption-tainted people, who looted Karnataka representing the BJP in Karnataka?” he asked.

Responding to the personal attacks Mr. Modi has made at him, Mr. Gandhi said that the PM is an angry person, he has anger for everyone and he sees the Congress President as a threat. On the attacks on UPA Chairperson's Italian roots, the Congress President said, “My mother is more Indian than many Indian people I see. My mother has sacrificed for this country and suffered for this country. It shows the quality of this Prime Minister when he makes these sort of comments. If he enjoys it, if he likes it, welcome.”

Asked to explain why many Union Ministers were flocking to Karnataka for BJP’s campaign, Mr. Gandhi spelled out the reason: P-A-N-I-C. The BJP has realised that the Congress party is doing things differently and they saw how it worked in Gujarat, the Congress President said.

This election is not about Rahul Gandhi, it is about the future of Karnataka, he emphasised. "Mr. Modi does not have anything to say about the future of Karnataka, his move is distraction,", Mr. Gandhi said. He stressed that he would not engage with the BJP by responding to distractionary tactics. The Congress campaign in Karnataka was constructive and positive, he asserted. “The Congress drew from the essence of the aspirations of the people of Karnataka to create its manifesto. The BJP's manifesto, however, was crafted behind closed doors and half of it was copied from the Congress manifesto,” added Mr. Gandhi.