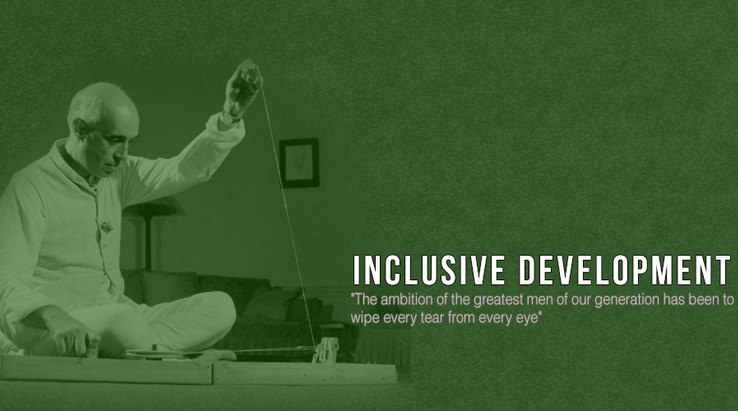 "I will give you a talisman. Whenever you are in doubt, or when the self becomes too much with you, apply the following test. Recall the face of the poorest and the weakest man [woman] whom you may have seen, and ask yourself, if the step you contemplate is going to be of any use to him [her]. Will he [she] gain anything by it? Will it restore him [her] to a control over his [her] own life and destiny? In other words, will it lead to swaraj for the hungry and spiritually starving millions? Then you will find your doubts and yourself melt away." --- Mahatma Gandhi

"We have achieved political freedom but our revolution is not yet complete and is still in progress, for political freedom without the assurance of the right to live and to pursue happiness, which economic progress alone can bring, can never satisfy a people. Therefore, our immediate task is to raise the living standards of our people, to remove all that comes in the way of the economic growth of the nation. We have tackled the major problem of India, as it is today the major problem of Asia, the agrarian problem. Much that was feudal in our system of land tenure is being changed so that the fruits of cultivation should go to the tiller of the soil and that he may be secure in the possession of the land he cultivates. In a country of which agriculture is still the principal industry, this reform is essential not only for the well-being and contentment of the individual but also for the stability of society."--- Pandit Jawaharlal Nehru during his address to the US Congress October 13, 1949.

"The economic issues are most vital for us and it is of the highest importance that we should fight our biggest enemies – Poverty, unemployment. Whether it is agriculture or industrial development, or for that matter, development in other fields, the basic fact remains – that it would serve the largest number of our people”--- Shri Lal Bahadur Shastri. ."Development is not about factories, dams and roads. Development is about people. The goal is material, cultural and spiritual fulfilment for the people. The human factor is of supreme value in development." --- Shri Rajiv Gandhi ."We want more youth, women, Adivasis in Parliament and Assemblies. We want more youth to join politics to cleanse the system. We cannot achieve development without empowering the youth. Our country will surge ahead fast only if we have more youth and women as lawmakers."--- Shri Rahul Gandhi during his speech in Gwalior, October 17, 2013