Shri Rahul Gandhi Interacts with the People of Tamil Nadu 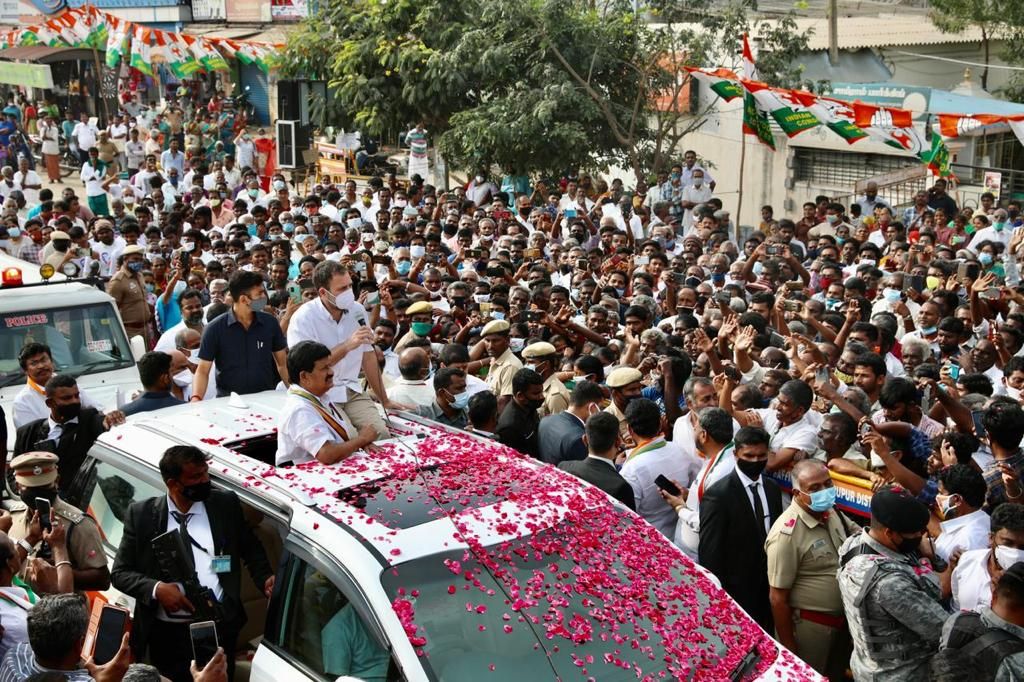 Shri Rahul Gandhi kicked off the Indian National Congress party’s campaign for the upcoming Assembly elections in Tamil Nadu. He interacted with the people of Tamil Nadu for three days and visited various districts and events to truly understand the voice and the problems of the Tamilian people.

The Congress leader and sitting Lok Sabha MP from Kerala's Wayanad, participated in roadshows at Coimbatore, Tiruppur, Poondurai, Perundurai and Uthukuli in Erode district, Dharapuram, Chinnadharapuram and Karur. He also interacted with representatives of the MSME sector in Tamil Nadu, with industrial labourers, the weaver community and the farmers of the state. Shri Rahul Gandhi listened to their plight and emphasised the importance of celebrating Tamil culture. Further, he paid floral tributes to India’s freedom fighters, Tiruppur Kumaran and Dheeran Chinnamalai.

Shri Rahul Gandhi interacted with representatives of Micro, Small and Medium Enterprises (MSME) in Kalapatti, Coimbatore where he heard the problems of the sector and how the BJP government has done nothing to help them. He stressed that the major economic policies of the current government like Goods and Services Tax (GST) and demonetisation broke the backbone of the economy and destroyed the MSME sector.

"A massive crippling blow delivered to the economy was demonetisation. It devastated small and medium industries because you are dependent on the cash flow," said Rahul Gandhi. Criticising the GST decision of the Modi government, he added, "It needs to be restructured, it needs to be conceptualised. The current regime imposes a huge load on smaller regional businesses. It is the commitment of the UPA (United Progressive Alliance) government that when we come to power, we will restructure the GST."

Listening to the plight of Tamil Nadu’s industrial labourers and understanding their problems, Shri Rahul Gandhi said, “We have an unemployment problem. The first thing we need to do is start the economic engine once again which is currently jammed. Also a linkage between our education system and business system is critical.” The former Congress President said that he has a special relationship with the state and is indebted to the people of Tamil Nadu for having a loving relationship with his grandmother and father, former Prime Ministers, Smt. Indira Gandhi & Shri Rajiv Gandhi.

Interaction with the Weaver community

Attacking the government on several fronts, from economic slowdown to border issues, Shri Rahul Gandhi, in his interaction with the weavers community in Tamil Nadu, said that China would have never dared to come inside India had the labourers, farmers and weavers been strengthened, protected and given opportunities.

He also praised the handiwork of the weavers and said that the President of China would have worn clothes which were Made-in-India if the government had focused and laid out measures for them properly.

Accusing PM Modi of wanting to control the people of Tamil Nadu, the Congress MP said, “Tamil Nadu used to be a manufacturing centre, an industrial centre, and that strength has been eliminated by the policies of Narendra Modi. He thinks that just as he can control and blackmail the state government, he can do the same to the people of this state. He did not realise that people cannot be controlled and they themselves decide their future.”

“I have not come here to tell you what to do or tell you my Mann ki Baat, I have come here to listen to you, to understand your problems and try to help resolve them”, Shri Rahul Gandhi said.

Attacking the Centre over the three black farm laws passed with any debate on consultation, Congress leader Rahul Gandhi addressed the farmers convention at Vangal district in Karur, Tamil Nadu. He said that the three laws were "criminal" and vowed to oppose them in the interest of the farmers across India. Shri Rahul Gandhi also interacted with the farmers and held a question and answer session.

The laws are aimed to benefit "5-6 people closest" to PM Modi and that the PM wanted the farmers to negotiate with "huge corporates" instead of with small traders. "The result is going to be that millions of people who are employed by this agriculture system – farmers, labourers, loaders, small traders – all these people are going to be unemployed," Shri Rahul Gandhi said. "...they are trying to help 5-6 people closest to the Prime Minister and they are hurting the interest of millions and millions of farmers."

He charged the Central government with attacking the foundation of the country – labourers, workers, farmers and fishermen. "It is our duty to protect the interest of workers, farmers, fishermen and weavers," Gandhi said. While there was no shortage of money in the country, it was not being given to the poor and only used to waive off loans for the rich, he added.

Rahul Gandhi also attacked the Centre's earlier decisions of demonetisation and GST and asked the crowd how many benefitted from them. When nobody raised their hand, he said "The idea is to break the backbone of small and medium businesses, break the backbone of Indian farmers and to make Indian labourers slaves – all to make these five or six people happy."

Shri Rahul Gandhi in his various road shows and interactions with people, spoke of all the issues that the Modi Government has caused and how they’re trying to diminish the Tamil culture.

Stating that the Chinese would never have encroached on Indian land if our country’s economy had been strong, Rahul Gandhi said, "For the first time, the Indian people can see that Chinese troops have occupied Indian territory. As we speak today, thousands of Chinese troops are occupying our territory and the man with a 56-inch chest cannot even say the word China. That is the reality of our country."

While addressing the public meeting in Dharapuram, Shri Rahul Gandhi said, "Knickerwallahs from Nagpur can never ever decide future of the state. Doesn't matter how many parades they have. Tamil Nadu's future will be decided by the youngsters of Tamil Nadu."

"We will not allow Narendra Modi to destroy the foundation of India. He has also got another confusion- he thinks that just because he can blackmail the government of Tamil Nadu, he can control the people of Tamil Nadu. He does not understand that only the Tamil people can decide on the future of Tamil Nadu," Rahul Gandhi went on to say.

Shri Rahul Gandhi also said that he wanted to be a 'soldier of the Tamil people' in Delhi and claimed he would not allow the BJP to "disregard Tamil culture". His ties with Tamil Nadu are bonded by "love, affection and blood.”

"I understand, accept and respect the Tamil spirit and culture. I am not going to allow the Prime Minister and the BJP to disrespect the Tamil people no matter what.” During his roadshows, the Congress leader attacked the BJP for trying to put down Tamil Nadu to a 'second class place' by imposing one culture and one language on them.

Among the key issues that Shri Rahul Gandhi highlighted in his speech, were the ongoing farmers' agitation against the three black laws introduced by the Centre, demonetization and GST.

"Today, we have a Prime Minister who is trying to build a roof by destroying the foundation and the walls of the building. People around him are too scared to tell him about his own ignorance.," Rahul Gandhi alleged.

Videos of Interactions with the Tamil People

Shri Rahul Gandhi addresses the public in Tiruppur, Tamil Nadu during a roadshow

Shri Rahul Gandhi addresses the public in Erode, Tamil Nadu during a roadshow

Shri Rahul Gandhi addresses the public in Karur, Tamil Nadu during a roadshow