President of the Indian National Congress

Smt. Sonia Gandhi is the President of the Indian National Congress Party. She is the longest serving President of the party, having been elected since 1998. She was also the Chairperson of the Coordinating Committee of the ruling coalition, the United Progressive Alliance.

Smt. Gandhi was born on December 9, 1946. After her early education, she attended a foreign language school where she studied English, French and Russian. She met Shri Rajiv Gandhi in Cambridge where she was doing an English language course. They were married in New Delhi in 1968. She has a son, Shri Rahul Gandhi, a daughter, Smt. Priyanka Vadra, and two grandchildren.

Smt. Gandhi spent most of her married life largely as a private citizen looking after her family. She was a companion to her mother-in-law, Smt. Indira Gandhi, during many of her official duties and frequently acted as her hostess. During the years 1984 to 1991 when her husband was Prime Minister and then briefly leader of the Opposition in the Lok Sabha, she assumed a limited public role, mostly accompanying him on his tours in the country and abroad. At the same time, she looked after his parliamentary constituency, Amethi, in the state of Uttar Pradesh, concentrating on health-care camps and other welfare activities.

After the assassination of her husband in May 1991, she set up the Rajiv Gandhi Foundation, a non- governmental organisation, and its associated think-tank, the Rajiv Gandhi Institute for Contemporary Studies. As Chairperson of these, she kept herself occupied in their activities which commemorate her husband's legacy.

Smt. Sonia Gandhi took the primary membership of the party in 1997. Shortly before the Lok Sabha elections in 1998, in response to widespread demands from Congress party rank and file, she entered public life. She campaigned vigorously on behalf of the party and became the President of the Indian National Congress Party in April 1998.

Smt. Gandhi was first elected as a Member of Parliament from the Amethi parliamentary constituency in 1999, following which she became Leader of the Opposition in the Lok Sabha. In the 2004 General Elections, she led the electoral campaign of her party which secured the largest number of seats. This enabled the Congress Party to form a coalition government (UPA). In this election, she was elected as a Member of Parliament from Rae Bareli in Uttar Pradesh.

The Congress Party unanimously elected her as its leader in Parliament, and she was therefore expected to be sworn in as Prime Minister. However, she declined to accept the position and nominated Dr. Manmohan Singh to lead the coalition government. Apart from being the Chairperson of the United Progressive Alliance, she was the leader of the Congress Party in Parliament.

She was also the Chairperson of the National Advisory Council (NAC) till May 2006, a forum that made periodic recommendations to the government in areas of socio-economic importance. Among the initiatives that have resulted in official action were NAC's recommendations relating to the National Rural Employment Guarantee Scheme, the Right to Information Act, the National Rural Health Mission, the Mid-Day Meal Scheme, the Jawaharlal Nehru Urban Renewal Mission and the National Rehabilitation Policy. She resigned from the Chairpersonship of the NAC, and also her Lok Sabha seat, after a controversy broke out over office of profit, only to be re-elected with an even greater margin.

She addressed the United Nations on 2 October, 2007—Mahatma Gandhi's birth anniversary—which is observed as the International Day of Non-violence after a UN resolution passed on 15 July 2007. This was in response to a resolution passed by the Indian National Congress during its Satyagraha conference in January of the same year.

She resumed Chairmanship of the National Advisory Council (NAC) when it was re-constituted on 29 May, 2010.

She has consistently been named as one of the most powerful women in the world by numerous publications. She is particularly interested in issues related to the environment, empowerment of the disadvantaged, especially women, and the welfare of children.

Smt. Gandhi has authored two books on her husband, Rajiv and Rajiv's World, and has edited two volumes of letters exchanged between Pandit Jawaharlal Nehru and Indira Gandhi between 1922 and 1964 entitled Freedom's Daughter and Two Alone, Two Together.

Her other interests include reading, Indian art—contemporary, classical as well as tribal, Indian handlooms and handicrafts and, both folk and classical music. She also has a diploma in conservation of oil paintings, from the National Museum in New Delhi. 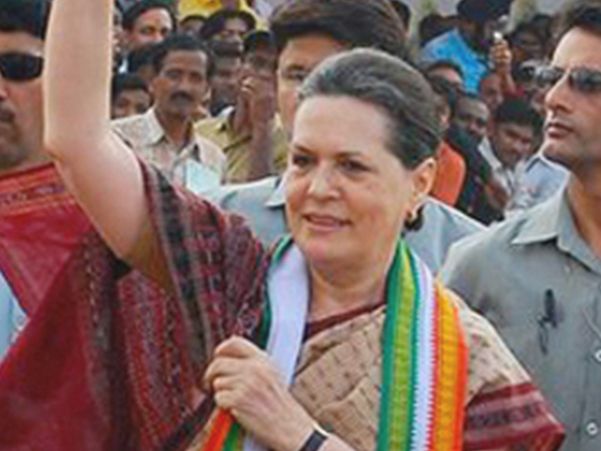