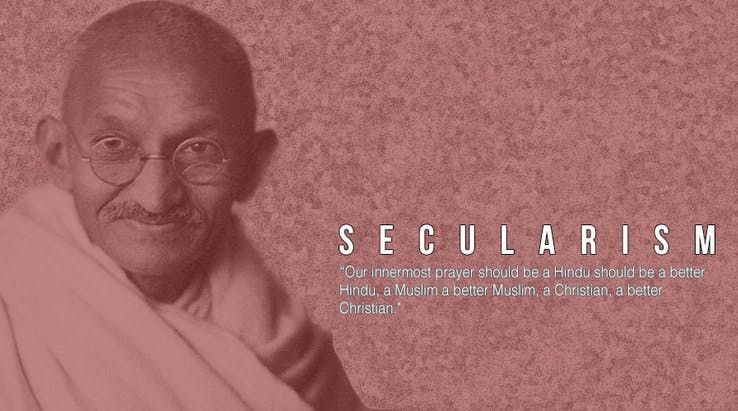 "I came to the conclusion long ago … that all religions were true and also that all had some error in them, and whilst I hold by my own, I should hold others as dear as Hinduism … our innermost prayer should be a Hindu should be a better Hindu, a Muslim a better Muslim, a Christian a better Christian." ---Mahatma Gandhi (Young India: January 19, 1928)

"We talk about a secular state in India. It is perhaps not very easy even to find a good word in Hindi for ‘secular’. Some people think it means something opposed to religion. That obviously is not correct. What it means is that it is the state which honours all faiths equally and gives them equal opportunities; that, as a state, it does not allow itself to be attached to one faith or religion, which then becomes the state religion.” --- Pandit Jawaharlal Nehru (foreward to Dharma Nirapeksh Raj by Raghunath Singh) "Secularism and democracy are the twin pillars of our State the very foundations of our society. From time immemorial, the vast majority of our people are wedded to concepts of secularism, religious tolerance, peace and humanity." --- Smt. Indira Gandhi's Address in Parliament on December 22, 1967

"Secularism is the bedrock of our nationhood, secularism as defined not in the English dictionaries, where it is defined as ‘non-religious’ or ‘anti-religious’, but secularism the way Panditji defined it as Sarva Dharma Samabhava which allows every religion to flourish in our country. Every community, every caste, every linguistic group must be allowed freedom to flourish, prosper and develop, yet they must be woven into one India, to a unified India.

India is not just a mere geographic expression or a political entity. India dates back to thousands of years; the boundaries have changed, the politics have changed but still India has remained India. It is the thinking, it is the thought, it is an inner spirituality that makes India." --- Shri Rajiv Gandhi's speech 'Uphold Secular Values' at the National Symposium on India' Struggle Against Communalism on October 9, 1986